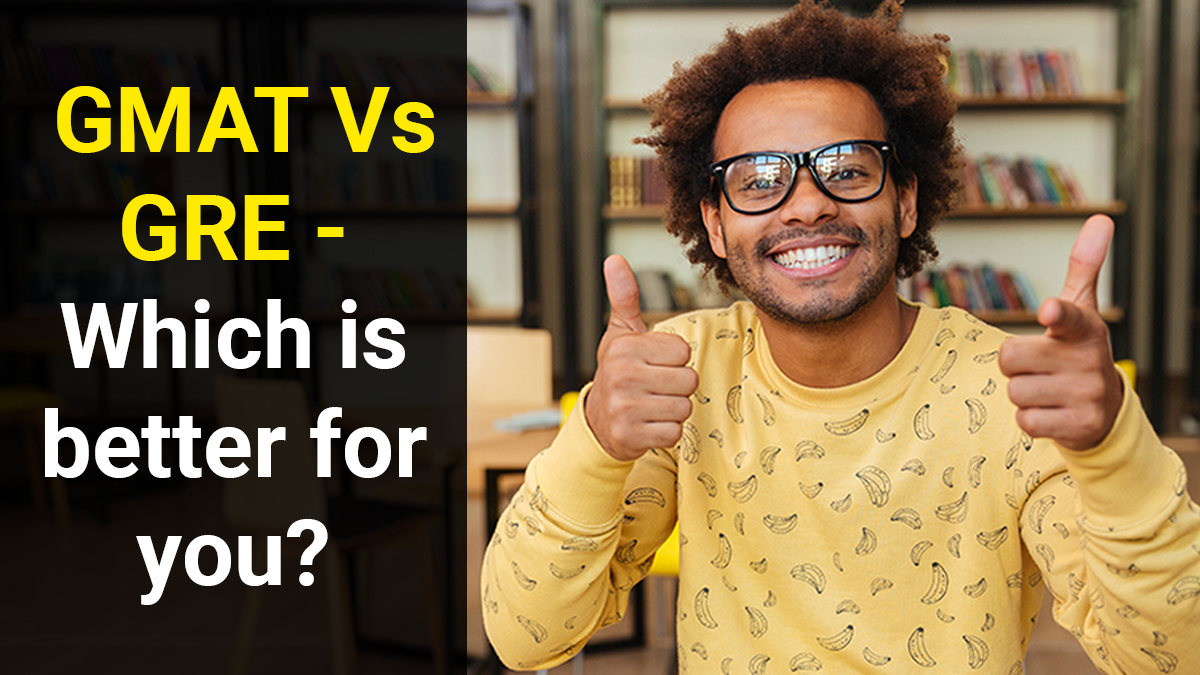 GMAT vs GRE : Which Test is Better for You?

Many of the top B-schools today accept both GMAT as well as GRE scores for admission in an MBA program. So, when it comes to deciding which test to go for, most students have a hard time choosing between the two and as a result, end up preparing for both. This is both tedious and time-consuming. So, if you are one of those students who is confused about which test to choose and as a result planning to appear for both, this post will help you stack the differences between GMAT and GRE, aka GMAT vs GRE, especially when getting an MBA degree is your ultimate goal!

In this article, we will cover the following topics –

GMAT Vs GRE : Differences Between the Tests

I. The Test Structure

The Quant section in GMAT is tougher compared to the GRE (particularly due to the Data Sufficiency problems). On the other hand, being vocab-based, the Verbal section in GRE is usually more difficult for the non-native English speakers. To put it simply, the difficulty level of the two tests vary depending upon the individual’s knowledge in the two sections and skill.

Apart from the overall test structure and differences in the difficulty levels, the GMAT and GRE have certain other differences as well. Let’s see what those differences are –
[Image]

Your scores in GMAT and GRE solely depend on your performance in the Verbal and Quant sections, while the other two sections do not impact the scoring. So, to effectively prepare for the test, it is important to understand the two sections for each test in detail –

I. GMAT Vs GRE: Verbal

While the Verbal section in GMAT is more logic-based, in GRE the focus is more on vocabulary. So, while learning words will help improve your verbal scores in GRE, improving your grammar skills will be more useful in GMAT Verbal. Let’s see the structural differences in the Verbal sections –

GMAT Quant is generally more difficult compared to the math in GRE. While the syllabus is same for both GMAT and GRE, the question formats differ. Not only are the GMAT questions overall more challenging, most students find the data sufficiency questions to be the most difficult.

Another major difference between the Quant sections in GMAT and GRE is that GRE allows students to use a calculator, whereas the GMAT does not. Let’s see the type of questions and other differences you will find in GMAT and GRE Quant –

How Should You Choose Between the GMAT and the GRE?

Every student with an MBA goal battles with the ‘GMAT or GRE?’ dilemma! The decision is crucial to make because your entire preparation followed by the application journey is going to depend on what you ultimately plan to do! While there in not a one-line answer that solves the predicament, there are three factors that you must consider to make an informed decision –

a) Your Ultimate Goal

b) Are You Aiming for a Specific School?

For instance, if you went for GRE because your dream B-school considers it but didn’t make it into the school, you will either have to settle for a school you do not like or you may have to start prepping all over again. Not only did you waste a lot of effort preparing for the GRE, but also time. A better decision is to go for GMAT so you have multiple options to choose from.

Also Read: 3 Mistakes to Avoid At the Start of Your Prep

This is because the GMAT test is structured in a way that it gives plenty of insights into the candidate’s decision-making skills, analytical reasoning skills, data interpretation & understanding case study capabilities, as well as communication skills. Therefore, not only are the admission committees more comfortable with GMAT scores compared to the GRE scores, a sizeable number of firms also consider the candidate’s GMAT scores before hiring them for a role.

d) How Strong is Your Quant and Verbal?

Since the difficulty level of the two sections vary in these internationally acclaimed tests, knowing your strengths will make it easier for you to decide which exam will be easier for you. While one student may have strong mathematical skills, another student may be fluent in the English language, or both.

Recommended Read: How to Start Your GMAT Preparation?

Your final goal plays the most important role in deciding if you should go for GMAT or GRE. The next step is naturally to identify if your dream B-school accepts both GMAT and GRE scores, or only the GMAT scores. If your preferred school prefers both, you must choose the test that is easier for you. One way to do it is to take the mock test of both and see where you are comfortable the most. You can scroll through your chosen school’s website to see if they accept GMAT scores, GRE scores, or both. If GMAT is your final decision, GMATWhiz will help you simplify your GMAT journey.

Suggested Read: How to start preparing for the GMAT

When To Take the GMAT - What is the Right Time?
GMAT Online Whiteboard – Practice Questions in Same Window!
How Does the Online GMAT Whiteboard Work?
Loading Comments...
%d bloggers like this: