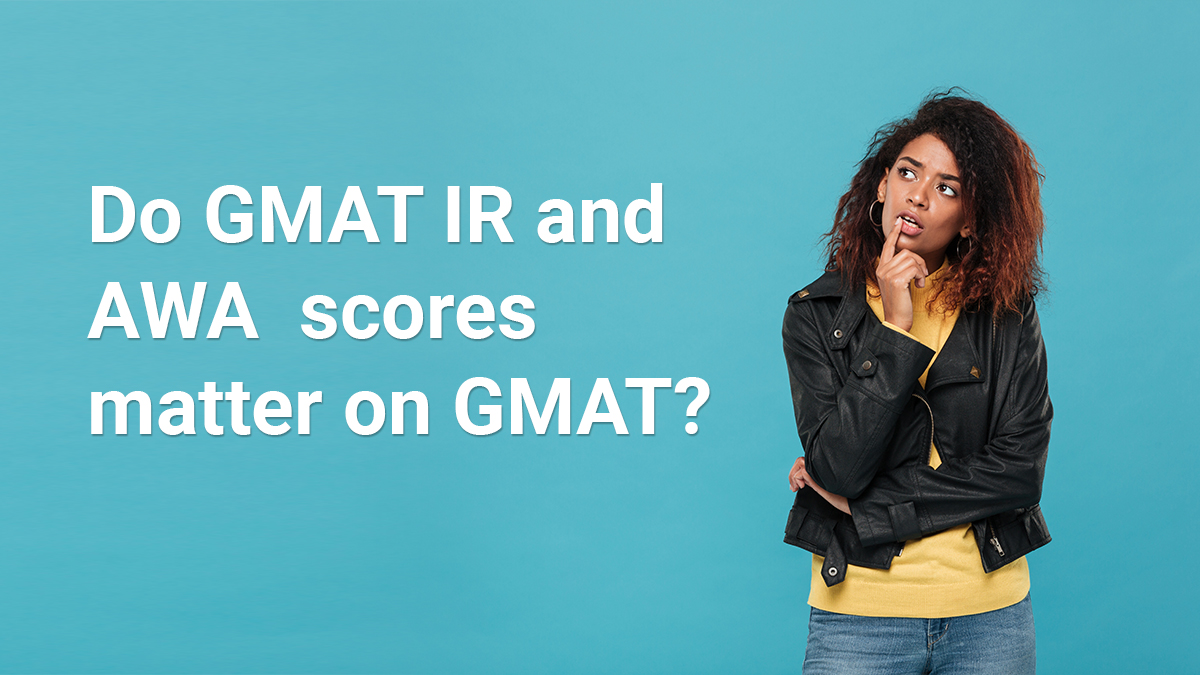 Importance of IR and AWA scores in GMAT

Anyone who is preparing for the GMAT is aware that GMAT Verbal and Quant scores are important when it comes to seeking admission in B-schools. But these are not the only sections on GMAT. Students appearing for the test have to prepare for two more sections i.e. Integrated Reasoning (IR) and Analytical Writing Assessment (AWA) on GMAT.

Importance of IR and AWA Sections in GMAT

The IR and AWA scores are not included in the overall GMAT score. Instead, they are added separately in the final GMAT score card. This leaves a lot of students confused about the significance of the two sections. In this article, we will be answering some of the frequently asked questions regarding the two sections and clear your doubts about the same, once and for all. Let’s take them one by one –

I. How are the IR and AWA sections scored on GMAT?

In the AWA section, each essay is scored twice, once by a human reader and then by a computer. The average of the two scores is then considered as the section score. For the IR section, the score depends upon the total number of questions you answer correctly. If you get even one part of a question wrong, you will not receive any credit for that question.

II. What is the importance of AWA section in GMAT?

The main purpose of the AWA section on GMAT is to test how a student conveys his thoughts in writing. Since the business world requires regular communication in written form, it is important for students to perform well in this section.

Now, when it comes to significance, compared to other sections, the admission committees usually give less importance to the AWA section. While the Quant, Verbal, and GMAT scores are given the most importance, the IR scores are also considered to be more important than the AWA scores. But, this does not mean that you have the leverage to take the AWA section lightly. A poor AWA score can easily break your case.

III. What is a good GMAT AWA score?

The average score for GMAT AWA is 4.48. Therefore, to be on a safer side, students must try to score at least 5 in GMAT AWA section. Devoting 10% time on AWA section is usually enough to get this score.

Must Read: How to Identify the Right Target GMAT Score?

IV. What is a good GMAT IR score?

Generally the average GMAT IR score is 4.29. A score lower than that may work against you in seeking admission in your favorite school. So, a score above 6 can be considered safe.

V. What is the importance of GMAT IR in admission process?

The IR section on GMAT tests the student’s decision-making abilities which ultimately reflects their preparedness to enter the business world after getting the degree. To test that, the IR section requires the students to –

Since the global business market has been under a heavy influence of technology and more and more firms becoming data-driven, good analytical skills are at an all-time high demand. Although students will learn to assimilate information and take meaningful decisions from incomplete information in business schools, the IR scores help adcoms test the analytical skills of the prospective candidates and check their readiness to be an industry leader or manager in future.

VII. What is more important on GMAT, IR or AWA?

The Quant and Verbal sections are undeniably the most important part of the GMAT exam as they have a direct impact on your chances of getting an admit from the school of your choice. However, it is also true that although indirectly, the IR and AWA sections are important too.

While we have already shared how most business schools consider IR scores important, the AWA section enjoys its own share of importance as it reflects the candidate’s ability to present thoughts and ideas in a limited time frame. On the other hand, the non-native English speakers can also leverage the AWA section to present their hold over the English language with the help of AWA section.

In simple words, performing well in just one section on GMAT is not enough. You must follow a holistic approach towards GMAT and make every effort needed to score well in all the four sections on GMAT. To make that happen, you must create a personalized study plan, collect the right resources, and start your GMAT preparation.